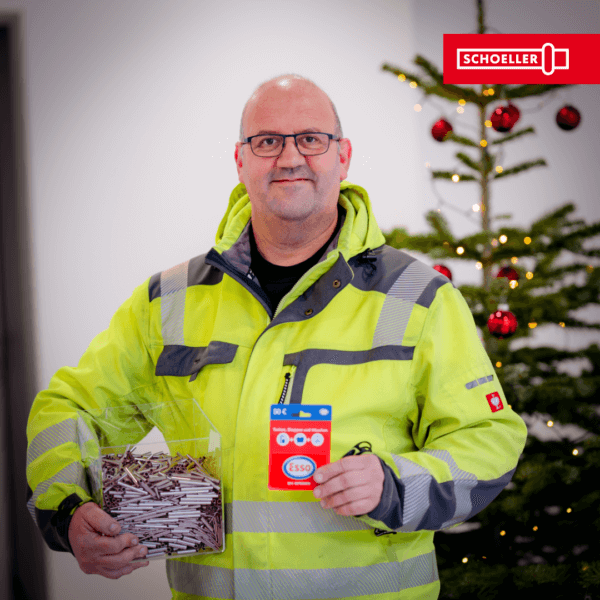 Hellenthal, 16 December 2022 – At the end of the year, Schoeller had a surprise for its employees: For the first time, an internal Christmas party took place at the Hellenthal site. The largest employer in the region thanked its employees for their commitment and dedication in a very eventful year marked by geopolitical upheavals. “With a really great team performance, we have bucked the trend very well and largely achieved our goals. This strong performance shows what our team is made of and how good we are at overcoming challenges. This should give us courage and confidence for 2023,” says Frank Poschen, CEO at Schoeller, praising the team spirit in the company.

At the same time, employees and the company wanted to do something good for the community and its citizens and thank them for the good cooperation in Hellenthal. For this purpose, the employees had organised a guessing game during their Christmas party. They donated 1 euro for each estimate given. At this point we would like to congratulate Frank Dümmer for winning the €50 fuel voucher, who with the estimated amount of 4,300 stainless steel tubes was closest to the correct number of 4,318 tubes. This year, the amount goes to the youth fire brigade of the Hellenthal-Blumenthal fire brigade.  “Our colleagues have been eagerly guessing. We increased the sum that has been raised to a round amount of € 1,000, with which we support the work of the youth fire brigade of the Hellenthal-Blumenthal fire brigade.”, says Timo Klein, responsible for Corporate Development & Marketing at Schoeller.

The personal meeting to hand over the donation with an interesting exchange took place on January 3rd, 2023 at at the fire station of the fire brigade Hellenthal-Blumenthal.